It seems like yesterday when we mobilized PACA volunteers for the Sarawak state elections in May 2016; unlike other parts of Malaysia elections happens in Sarawak every 2.5 years averagely and soon PRU14 will be upon us again. Looking at the electoral landscape it seems that our job is never done. We continue this journey towards an empowered citizenry and voters in the face of the challenges and odds against our country’s democracy not just on the level of free and fair elections but politics and governance in general. For Sarawakians a matter close to their hearts is state rights and autonomy. But what is more autonomy without more accountability? Would the common man and women begin to taste and see the greater autonomy that politicians in the state across both divides are championing for? The autonomy debate should not eclipse all other important national issues like rising costs of living, employment opportunities for graduates and the young and good governance amongst many others. More on this at the end of this review.

ROSE's existence and continued relevance must be in the context of community and other civil society partners involved in the larger struggle of nation-building. As such for the first half of this year besides carrying out our own core-activities we also connect with Bersih Sarawak and more than half a dozen Sarawakian NGOs. In March we coordinated the U Kempen in the capital in Kuching in a push to bring down the horrendous number of unregistered voters down. The monthly mobile counters for Voters Registration was increased to all four weekends at different conspicuous places all over Kuching and Samarahan on top of leafleting and other campaign strategies. Later in September of this year, ROSE also participated in Bersih’s Absentee Voting Campaign (Undi Luar Kawasan) in which Sarawakian and Sabahan voters will be the principal benefactors (if EC accepts the proposals). It was launched in Sarawak with the submission of a Memorandum of Electoral Reform by Bersih 2.0 with special focus on Automatic Voter Registration & Absentee Voting Rights Reform. There was also 2 occasions of film-screenings (A Time to Swim and The Borneo Case followed by discussions) and a Workshop on Mobilization facilitated by Bersih Secretariat Outreach Officer held on 21st May 2017 for capacity building of the local NGOs in this coalition.

Every last weekend of the month commencing February of 2017, our volunteers faithfully took turns to man the mobile counters at the Kuching Sentral Bus Terminal, a mall located at 7th Mile. It was the ideal spot for us as that mall is the congregating place for shoppers and commuters from sub-urban areas of Batu Kitang, Bau, Siburan, Padawan and Samarahan. Another strategy to capture and register new voters from these areas is to appoint ‘local champions’ who are locals, speak the local Bidayu and who live in the kampongs to recruit/register new voters on a part-time basis. However, we do face problems of finding good local champions and are currently in the process of re-strategizing so that targets can be achieved. Be that as it may the ROSE team registered just over 2,000 new voters in a space of 11 months. We applaud the persistence and consistency of the volunteers whose passion knows no bounds.

1.    We released our first ever voter education animation video (English version) entitled “We Deserve Better!” in September 2017, based on and adapted from the Bakery story written by Jean Voon, a ROSE volunteer. The aim of this video was to inform the power of the individual and collective vote/voice and that if we fail to make our choice we are allowing the status quo to persist. This is an important message in the light of recent surveys that some segments of electorate may choose to sit out this coming elections for a meriad of reasons including that their vote would not make a difference. This project had its share of hiccups and challenges from inception to production as it was our inaugural video project but our team learnt lots as a result of it. The BM and Iban versions of it was subsequently released in the months after that. We ask that you continue to share these videos over whatsapp and Facebook and you may access it via these links. English (https://youtu.be/fQGia3_rGFQ), BM (https://www.youtube.com/watch?v=P2yW9MFOSl8) and Iban (https://www.youtube.com/watch?v=P2yW9MFOSl8). We are now in the process of the recording of the script in Chinese and we will release that version in the new year after editing.

2.    Meanwhile our new sub-committee are also on the drawing board of another short video project to ‘get out the vote’ in Sarawak this coming GE 14. Our script writer is working on the content and the aim is to release and viralise it over whatsapp and other social media before the elections next year. The target audience are Malaysians in general but Sarawakian voters in particular who needs a nudge or a knock to get out to vote! Again the aim is to educate and convince that their vote matters. We will be on the lookout for actors and actresses very soon! We are also proposing to coordinate a larger and wider campaign to GET OUT THE VOTE by collaborating with other groups and NGOs or individuals including those on the arts, writing and media or lifestyle scene so as to give more variety, momentum and strength of voice to the campaign.

Four sessions were conducted during the first half of this year ; 3 in Kuching and in partnership with youth & church based organisations as well as with native community group in the semi-rural town of Simunjan. The module/workshop needs to be aggressively promoted to local communities and appropriate young adults and youth groups. The process of connecting with educators and the local public university and colleges  for the purpose of sharing the workshop is slow and difficult. It is also our intention to train up more facilitators to conducting this programme but the needs do not justify this at the moment. The module was originally designed as ROSE’s respond to what we see as the greatest need in Sarawak - to increase level of awareness and knowledge of voters and citizens on democracy and how it is suppose to work. Do feel free to give your input and suggestions if you can help us move this forward and better still to volunteer and involve yourself in helping us promote this module.

In preparation to raise PACA volunteers for GE14, we launched our trainings (with updates)in September of this year. Our team of facilitators have conducted a total of 5 sessions in Sarawak (Kuching-2, Bintulu-1 and Miri -2 ) and 3 in KL to date. Interest in becoming PACAs is very low in Sarawak and we feel it is due to the general sentiments of the day towards elections and the future in general. We certainly hope as as the election date draws closer, those who had been trained or served will come forward for our planned refreshers and offer themselves to serve. We are still looking for someone to help us do a short video to market ROSE PACA trainings.

Last but not least our thanks goes to those who responded to our 2nd public fund-raising campaign and Letter of Appeal in August 2017 many of whom are are regular donors but there are new ones. It goes without saying that we are very touched by your kind deed but more so by the fact that you have showed that you stand in solidarity with our cause for a better Malaysia. Without your support and generosity we would not have been able to carry out all those activities that we had planned at ROSE. We raised about RM12,450 this time. A big THANK YOU from all of us at ROSE.

Last but not least we wish all of you a meaningful and fulfilling 2018 ahead. If not now, when? If not you, who? 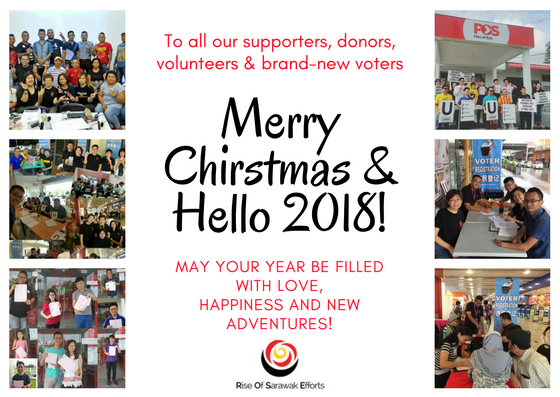